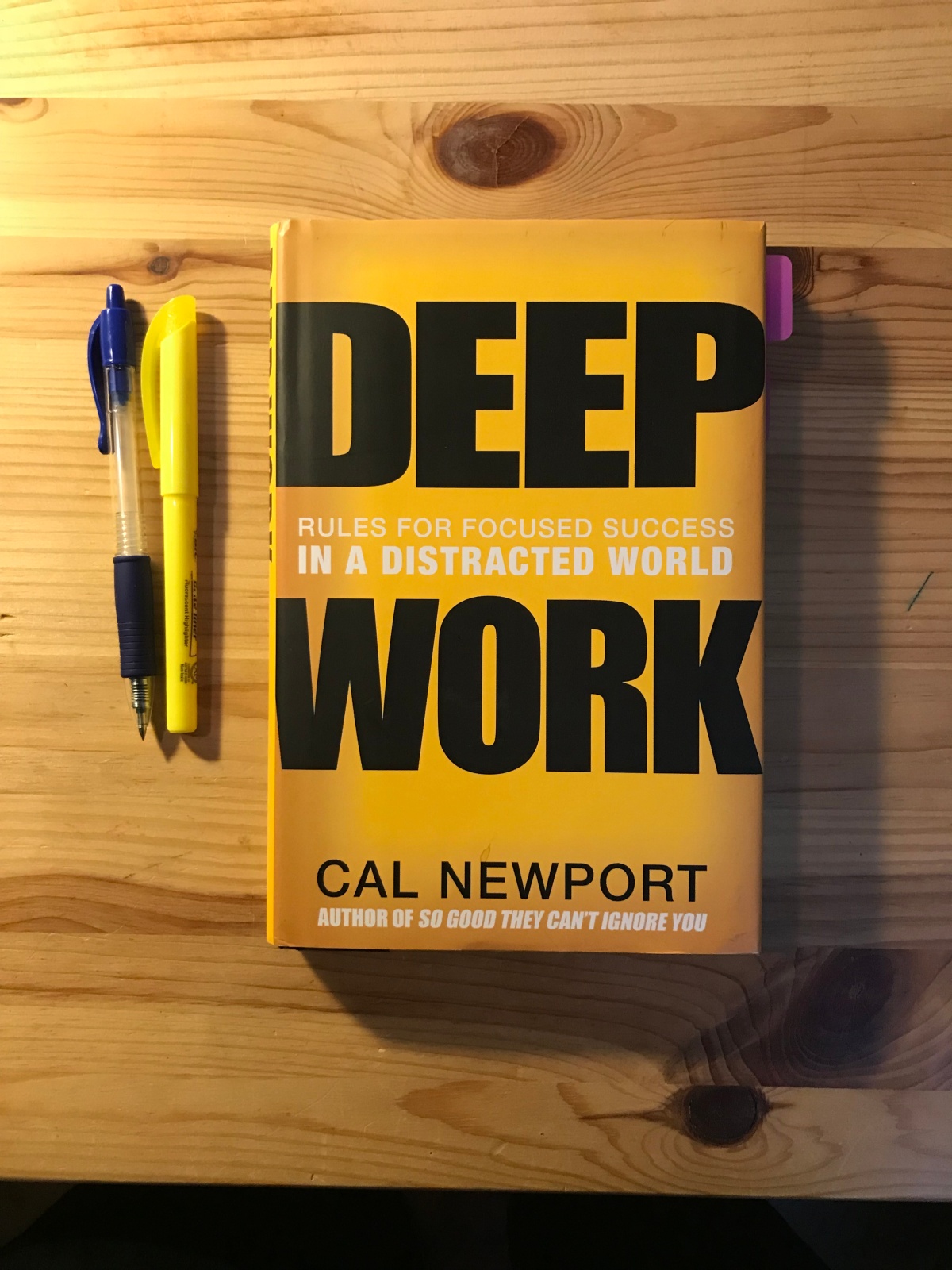 When you see the title of Cal Newport’s book Deep Work it can create the image in your head of an intellectual looking person poring over books and taking notes in some secluded area of a library. This image makes it feel like working deeply is for scientists and researchers but has no intersection with my life. The concept of Deep Work that Newport develops is quite different than the previously described image. Newport makes the case that high quality work is just a function of time spent and the intensity of focus. We all have time for what we decide to use it for and we can all learn to focus better on the things that are important to us. Because we posses both of these things we can all learn to perform deep work. The book describes what deep work looks like and provides strategies to accomplish more of it in our lives.

In the book Newport says “…your world is the outcome of what you pay attention to…” Since depth is important in my field of engineering, I cannot afford to lose time and effort by paying attention to what does not matter. At work I often create my own reality of stress, anxiety, and worry by focusing on these emotions. For example, by constantly checking my email inbox throughout the day I ensure that the issues which come up stay at the front of my mind all day long. My work life is then dominated by my inbox and whatever comes into it. To fight this I have begun the habit of not immediately checking my email when I arrive for work every morning. Perhaps I wait 1 or 2 hours to get some work accomplished before I dive into my email. Another way I have applied this is by not immediately reacting to every email that comes into my inbox. Not every situation is a disaster and my response is not usually needed immediately, if at all. I can also close my email for intervals throughout the day to accomplish certain tasks distraction free and the earth will continue to spin.

In order to focus your attention on the right things throughout the day, you have to have a plan. One idea that Newport gave to plan your day better is to start each day by creating a block schedule of your day on a piece of notebook paper and assigning activities to each block. You can batch similar tasks together, you can plan for lunch breaks, but the idea is that you assign each minute of your workday a job. Inevitably you will be interrupted or a new task will manifest which takes priority over your plan. When this happens it threatens to throw off your schedule. All you have to do is start over from wherever you are on your schedule and map out the remainder of the day. For me this exercise does 2 things:

In order to become good at deep work we not only have to start our days correctly by planning but we also have to end them correctly. Newport describes what he calls a “shutdown ritual” which is a set of steps that ensures he has reviewed all the open items and notes from the day, has a plan to complete them, or trusts that they are documented in a place where he can revisit them later. I have found this concept very helpful in my own working life as it helps me release my mind from work at the end of the day and allows me to enjoy my life outside of work. Our minds need rest but at the same time incomplete tasks cannot be left unplanned for because they will create open loops in our minds that take up mental space and energy. As long as we have noted and planned an actionable step for all open items, our minds are free to rest at the end of the day.

We all want to be fulfilled and have purpose to our lives. This desire is vague though and hard to get a handle on. We see many people around us accomplishing this in many different ways. Should we follow what they are doing? There is no blueprint. Deep work is a good way to cultivate the skill of discerning the meaning that is already present in your current role. You can apply these principles to be more efficient and increase your ability to perform deep work. I would recommend this book to anyone who wants to grow and generate more depth in his or her work.

Recently I have found myself questioning whether you can truly get ahead in your chosen career without using people and manipulating them. It can sometimes feel like those individuals who use power and manipulation continue to take strides forward while those who live with character, integrity, and honesty get left behind. I mean all you have to do is check out Robert Greene’s book The 48 Laws of Power to see how many successful people in history have used manipulation and tricks to get what they wanted at the expense of others (one example is Law 7: Get others to do the work for you, but always take the credit). I found myself asking friends what they thought because I’m never quite sure if I’m just being pessimistic and need some perspective. In light of this, reading Give and Take couldn’t have come at a better time. Adam Grant shows how givers tend to make up the top of the success ladder and how matchers and takers can often be at a disadvantage. This book was very helpful, especially in this particular season of my life and I hope you can gain some value out of the few main ideas I pulled out.

Whenever we collaborate with people at work we are constantly deciding how much value we will add. Are we trying to take more than we give or are we trying to contribute to others with no thought as to what we will gain in return? Grant defines takers as people who want to take much more than they give. They do not care about the interests of others. For takers, we are all in a competition and they want to win, which often means self-promotion with no thought to others. On the other side of the spectrum are the givers. While takers are self-focused, givers tend to think about others in terms of what they need. Givers are always looking for ways to give with no thought as to what they will get in return.

“If you’re a giver, you might use a different cost-benefit analysis: you help whenever the benefits to others exceed the personal cost.”

Then there are the matchers, who end up behaving somewhere in between takers and givers. Matchers want to maintain equality in what they give and get, they want their dealings to always be fair and want to receive as many favors as they give.

Throughout the book Grant shows how givers can be successful and shares the stories of a wide range of successful givers like entrepreneurs, venture capitalists, comedy writers, teachers, health care professionals, consultants, and politicians. In order to get the full benefit of these stories, you will have to read the book, however, there were a few other ideas from the book that I found helpful.

One of Grant’s examples of a successful giver is C. J. Skender who teaches accounting for Chapel Hill and Duke University. He is very popular among his students and has an extraordinary ability to recognize and pull out talent. As I read about Skender, however, I began to see that he doesn’t really possess supernatural abilities of recognizing talent. This is exactly Grant’s point. Skender is very passionate about helping his students and always sees the best in them. He believes in their potential and there is a lot of evidence that supports the idea that what we expect from someone and express to them becomes a self-fulfilling prophecy.

“He isn’t unusual in recognizing talented people; he simply starts by seeing everyone as talented and tries to bring out the best in them. In Skender’s mind, every student who walks into his classroom is a diamond in the rough – able and willing to be mined, cut, and polished. He sees potential where others don’t. Which has set in motion a series of self-fulfilling prophecies.”

Givers don’t look for talent first, instead they look for people with grit (passion & perseverance) and seek to motivate them. As givers invest in these gritty people the potential they see in them often becomes a reality. At work it is often one of my responsibilities to teach, train, and mentor new or young engineers. I often struggle with motivation for this since it takes me away from my own work and the return on my invested time is not always quickly noticed. However, by reading Skender’s story I have begun to see coaching & mentoring in a different light. I want to be better at speaking to the potential in people rather than letting my preconceived notions become self-fulfilling prophecies. This is easier said than done.

Most people who want to be successful in life realize building influence is important. According to Grant there are basically two ways to gain influence: establish dominance or earn prestige. Take a guess which way takers get influence? Takers usually gain influence through dominance, which means using powerful and authoritative verbal and nonverbal communication. This is all about establishing a strong physical and dominating presence. The problem is this is a zero-sum game because the more dominance and power I show, the less there is for anyone else.

Earning prestige, on the other hand, means earning respect and admiration from others without being dominant. There is no limit to the amount of respect and admiration we can give. Grant describes a totally different approach for this called powerless communication, which entails speaking less assertively, asking questions, and relying on others input. On the surface this approach sounds like it wouldn’t work, however, Grant goes on to show how effective it is in areas like presenting, selling, persuading, and negotiating.

Grant shows how questions are effective for communication, especially when others are skeptical of your abilities or knowledge. By asking questions and listening you can build trust and credibility. He shows how powerless communication is effective when working closely in teams because it encourages members to speak up and share. Although takers may appear to be more effective leaders because of their dominance, this often discourages team members from speaking up and sharing ideas. When givers practice powerless communication they create psychological safety and allow members of a group to voice their thoughts. Soliciting advice and input from the group would seem like a weakness for a taker (making it appear they don’t have the answers) but this turns out to strengthen a team.

Reading this book came at a perfect time for me. I have been struggling through the question of whether you can be successful if you are focused on helping and adding value to others, rather than focusing on your own success and reputation. I found the explanation of takers, givers, and matchers to be helpful in building some framework for me to model my own leadership and influence. Focusing on identifying passion and perseverance in young engineers rather than innate talent will help me be a better mentor and coach. Using powerless communication will encourage my team members to share and open up while also building influence and trust. I hope these highlights add value to you as well and together we can work on applying them to our lives.